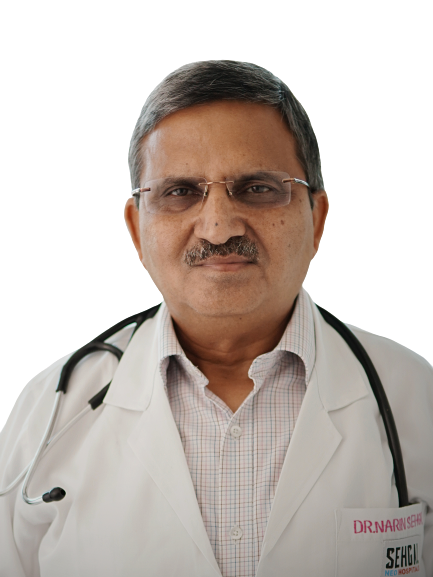 Dr. Narin Sehgal is a renowned General and Laparoscopic Surgeon with a rich experience of over 32 years in the field of surgery. He started practicing in 1990 as a freelance surgeon, attached to various setups. Given the need for quality healthcare services and facilities in the area, Dr. Sehgal started his own setup in West Delhi in 1994, which grew from a single room setup into the state of the art, multispecialty 100-bedded hospital that it is today.

Dr. Sehgal was among the early few to adopt Laparoscopy in India and to propagate and contribute to its growth – he has been conducting Laparoscopic Surgery since 1993 including basic and advanced Lap surgeries, Gynae surgeries and Urology surgeries. He is also highly experienced in Stapler Haemmorrhoidopexy, Transanal Haemorrhoidal Dearterialization and STARR. Under Cystoscopy & Ureteroscopy his expertise lies in TURB, TURBT, Bladder Stone, Ureteroscopic and Removal of Stones.

Additionally, he has attended and participated in surgical conferences & workshops in various parts of India, Singapore and Italy. He also presented a number of papers at a conference organized at the National and Asia Pacific level in Hyderabad,  Bangalore, Chennai, Jaipur & Delhi and was a part of the panel discussion on Laparoscopic Hernia surgery. He gave a talk on the ‘Pros & Cons’ of Surgical treatment of Morbid Obesity in Obecon 2009 held in New Delhi and chaired a number of session in various conferences organized by ASI, IAGES, OSSICON. He also presented his technique of Laparoscopic CBD Exploration in the Annual DMA Conference 2014.

Dr. Sehgal has held many key posts in Delhi Medical Association (DMA and IMA) and AHPI including

Dr. Sehgal is an active member of various medical forums. His memberships include –